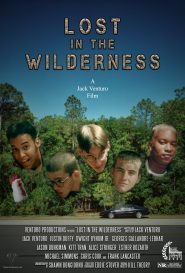 Lost in the Wilderness

Five friends run out of gas on their way to the movies, they take a short cut through the woods and wind up lost for months.

Jack Venturo’s 3rd movie. Made when he was 18 years old.

When “Star Wars: Episode I – The Phantom Menace” was released on May 19, 1999. Jack and his friend Justin Duffy saw all six showings the first day. They joked for months prior to the premiere and hoped nothing would happen to them that could make them miss the movie.

Jack started writing funny scenarios and soon completed the first draft of the screenplay that would become “Lost in the Wilderness”.  Jack wrote parts for his friends, bought some new equipment, called around about locations and even made a deal with the local independent movie theatre to show the movie for one night.

The movie was made in three months and it premiered on June 22, 2000 at the St. Pete Beach theatre.

The premiere was a sold out event, resale ticket holders received free autographed pictures of the cast at the box office, bracelets were sold and a photo album of the behind the scenes photos was on display in the lobby.

KILL THEORY the band that created all the original songs for the movie played live on stage before the movie started.

The movie was filmed on a Sony Handycam 8mm camcorder. the original edit of the movie was in very low quality and only existed on VHS.

A new edit was made in 2001. The Special Collector’s Edition was shipped to a hand few of people but never truly released on the internet; it was still not the best quality.

A few copies of the VHS were exported to DVD and sent to the cast and crew, this was still a rip from the VHS export.

In 2018 Jack decided it was time to go back to the wilderness. He found all the original tapes and saved as many as possible from deterioration by digitizing them and preserving them in the computer. He began to re-edit it and re-record audio, fix tracks and add all new music and effects.

Some new scenes were filmed with the help of his friends to make the final cut cleaner and smoother.

Here now is “Lost in the Wilderness” The definitive edition; the new trailer, new bloopers & outtakes, the fictional movie within the movie “Tests of Will” (1960), The new remastered News Clip, and “Behind the Wilderness” (2018) a brand new making of production diary documentary featuring never before scene footage.

Justin Duffy passed away in 2017, this movie is dedicated to him.

Written and Directed by
JACK VENTURO

Special Thanks
GEORGE LUCAS for being the great creator he is.
KEVIN SMITH for paving the way.
RICHARD HUGHES for making my first movie premiere possible at the Film Paradiso St. Pete Beach Theatre on June 22, 2000.
JEREMY HUMMER for the support and running the projector at the premiere.
MICHAEL SIMMONS for playing the doctor in the movie and being a fun and dedicated teacher.
FRANK J. MONTELEONE II for helping me edit the original cut of the movie.
GIBBS HIGH SCHOOL/PINELLAS COUNTY CENTER FOR THE ARTS for helping to shape me as an artist.
AMC THEATERS for being so generous and supporting a young filmmaker like myself.
THE CONTRIBUTORS for your support, donations and motivation, you helped make this movie possible.
ST. PETE FIRE DEPARTMENT/U.S. ARMY/ST. PETE POLICE DEPARTMENT for being supportive with all of my productions in Florida especially this one for helping us relocate and find the woods that were not on fire.
No animals were harmed in the making of this motion picture.
Filmed on location in St. Petersburg, FL with additional scenes in Palmdale, CA.
"Lost in the Wilderness" (2000)
Produced and distributed by VENTURO PRODUCTIONS